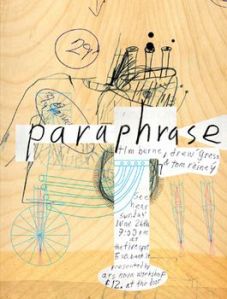 I recently found an interview I did 15 years ago with saxophonist, composer Tim Berne. At the time, he was on tour with his trio Paraphrase (including Drew Gress and Tom Rainey) and in DC to perform at Chief Ike’s Mambo Room in Adams Morgan. Chief Ike’s was just a couple of blocks from WPFW-FM, so Tim dropped by the studio for a bit of live on-air chat before sound check.

Tell us about the group Paraphrase. What do you see as the musical direction of this trio?

We had played together in different situations, always playing written music and improvising. We decided to depart from that strategy and just improvise. So we really don’t know what we’re going to do [laughs].

There’s no repertoire at all?

No, there isn’t. That’s the whole point of this group, I guess. We were curious to see what would happen if we committed to this strategy, because whenever we get together, we just play, and it was always fun. So we decided to do some touring and it’s not a whole lot different. It’s a little scarier, but the ratio of hits and misses seems to be about the same. We’re all pretty hard on ourselves anyway. It’s been interesting.

Some of our younger listeners may not know much about you. Tell us a little about your own background and what drew you to music.

Well, I was a real avid fan. I bought a lot of records and I used to go to New York a lot from Syracuse. I’d drive in to see concerts by Sam Rivers, McCoy Tyner, Sun Ra, and I was so into it that I felt like I wanted to be involved a little more. So I got a saxophone and got into playing and then moved to New York. I thought if I took lessons, I’d have to get serious. So I started taking lessons around ’74; a few with Anthony Braxton, and then I started studying with Julius Hemphill. I just started getting into it and I began writing music pretty fast because all my role models, my heroes, wrote music So I figured that’s what everyone did. I didn’t really know a lot about–I didn’t have a lot of information but somehow maybe I had a knack for organizing ideas, just using Anthony and Julius as a model for that. Then it was just sheer determination, I guess. But I always knew I didn’t want to have a job, so it seemed like a good field [laughs].

You mentioned studying with Braxton and Hemphill. What did that mean, exactly? Was it the experience of playing with them on a regular basis, or did they sit down and explain their systems?

It wasn’t even that. I was a beginner. With Braxton, it was like with any teacher; do this, do that.

Yeah, yeah. With Julius it probably should have been that, but we got into different things because he wasn’t really symmetrical as a person; Meaning he wasn’t going to really lay it out [in a linear way]. It was more everything at once, including things that he was thinking about, and musical problems he was faced with. So the first conversation we had was about magic in music. I was pretty much confused for quite a while, but intrigued because I admired him so much.

What was he getting at?

To make a long story short, when you’re playing improvised music with people, particularly when it’s not based on strict forms, and even when it is, there’s a certain chemistry that you have with some people and you don’t have it with others. You can’t really define it intellectually. It just happens. It’s the same thing with this group; we play 10 nights in a row and maybe 5 of the nights really stand out. There’s a magic that happens and we can’t predict it. We can’t define it but we can recognize it when it’s happening. You just know it. And that’s what Julius was talking about. It’s interesting, and if you’re a beginning musician, a beginning saxophonist, that’s a pretty wild concept. But we also dealt with tone and the nuts and bolts. It just wasn’t in a chronological order. You know what I mean? It wasn’t laid out for me. And part of his thing was teaching me how to think for myself. A lot of teachers pretty much tell you the way it is and then you buy it. But he gave me options and said you can figure it out for yourself.

You’ve been playing professionally now for 20 years. What do you think are the qualities of a good leader?

[long pause] Patience. Confidence. I think you have to be very open. It depends. For me, it helps to be open to other people’s ideas. I’m a pretty benign dictator. I studied to be a schoolteacher and I think most people like being involved in the process. It should be a partnership, even if you’re the teacher or the leader. So the more people feel a part of it, the harder they work. I’m sure in any job it’s the same thing; sports, whatever.

Are you an organized person, generally?

In my mind I am [chuckles]. If you walk into my room or my studio, it doesn’t appear that way. But I’m very organized; otherwise I’d never finish most of these things. I definitely wouldn’t have a label.

That’s why I’m asking. You’re not just a professional musician. You also run your own record label. In fact, isn’t this the second label you’ve run?

So what can you tell us about the challenges of running your own label? I’m sure a lot of musicians in our audience have thought about that.

First of all, I know that I can sell a certain amount of records based on the amount of touring I do and the sales of my other records. You just have to have the confidence that you can get these things to people somehow. You can’t tell people how to do that. It’s just that there’s enough of a demand, so I can do it. The other thing is I try to imagine what I would want to own as a listener. For me, these things are artifacts, not just cd’s. The CD that’s inside the packet is a part of it. But it’s not the whole thing. As a fan, I  like the rawest, most representative music. People say you have to be more concise in the studio and do shorter pieces for radio, but I think you just have to be good, and then there are a few thousand people who will want to own it. Then it’s just a question of keeping the budgets realistic. And when it comes to recording other people, I refuse to own the tapes. So if anyone is unhappy with it, they can just take their tape back. That’s my major beef with record companies. You know, you sell them the tape, and then it goes out of print or they sell it. So you lost your music, not just sales. And that’s why I finally started a label again. I just wanted to own my music, even if I sell just 5 copies. If in 5 years we find out it’s valuable to people, I’ll still own it.

It’s maintaining some kind of control.

It’s not for everyone. There’s a lot of really tedious work that most people aren’t interested in doing, or good at doing.

So how distracting is that for an artist to have to think about contracts or distribution or taking care of business?

To me, I just decided that it’s a creative act as well. And the way I’m doing it, it is. It’s related to everything else I do. So I try not to get too dark about all that business stuff I have to do. I don’t like doing it at the expense of playing, but I also don’t want to be in the situation where I’m a bitter musician complaining about record companies, complaining about promoters, and having not tried it myself. You just have to accept the fact that we’re not in control. We can’t get those people to behave any differently. And so the next thing is either to do it yourself and stop complaining, or accept that premise. I thought I had a partnership with a great friend and he sold the whole company. So I figured if that’s going to happen with him, then what’s the point?

When you do it yourself, you gain a greater understanding of how all the pieces fit together. I know you have to go set up for sound check, so let me close by asking what is your take on what’s happening in the music scene in New York these days?

Well, I mean everything is happening. I know where you’re going with it. Everybody wants to ask about the traditional thing. That’s what’s happening in uptown clubs; it doesn’t have anything to do with me. I think there is some good music and some that’s not so interesting. But for every one of those groups, there are groups doing kind of like what I’m doing, with guys writing music. They’re just not playing in those clubs, so you might not know about them.

How much of your work is in New York?

I do 20 gigs a year in New York. I do enough. I do as much as I can afford [laughs]. There’s tons of stuff going on. There’s no predominant scene. Certain types of music are appealing to certain labels–that’s never been any different. And it doesn’t bother me. It’s like selling shirts. And there’s nothing wrong with it. There are just as many close-minded people in the so-called free-jazz scene as there are in the straight-ahead scene. We go to places sometimes where the guys are so into stuff that they think we’re playing bebop. And they have an attitude that it’s not out enough. And vice versa. Most good, serious musicians can recognize someone else’s intentions as being real. Everyone is defensive and insecure. And so a lot of that stuff is blown way out of proportion. You read about it and the writers have so many, I mean they love to stoke those flames. They never talk to people. None of these guys ever call you up and ask you what you think. They don’t want to know. They want it to fit their theory. All the guys I play with play all kinds of music.